Borderline Personality (BPD) is believed to affect anywhere between 1-4% of the population.  It can be argued that BPD is the most commonly talked about personality disorder currently.  While these discussions can bring about awareness and advocacy for the proper treatment of the diagnosis, it can also bring about inaccurate stereotypes. 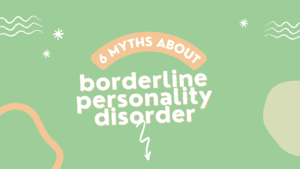 One of the biggest misconceptions of borderline personality disorder is that it only affects women.  While it is true that there currently exists a 3 : 1 ratio of women to men that are diagnosed with BPD, it does not mean that this is a “woman’s diagnosis.”1. There are other potential explanations for this ratio other than women are more prevalent.  For example, studies show that more women are engaging in therapy than men.  This is one possible explanation for the gender difference.

Additionally, if you put this ratio into a percent, approximately 25% of the population diagnosed with BPD is male.  This is a significant number.  It is important to note this to both show this is not a women’s only diagnosis, as well as to highlight the importance of men diagnosed with BPD.

MYTH #2: Those Diagnosed with BPD Are “Attention Seeking”

One of the most inaccurate “symptoms” you will find on the internet about people with borderline personality disorder is that they are attention seeking.  In fact, the explicit term “attention seeking” never appears in the manual therapists for diagnosing someone.

Instead, someone with bpd may have difficulty regulating their emotions.  As a result, when they are in distress, they may seek the company of others to not feel alone during this flooding of emotions.

This also can appear during another serious symptom of BPD: thoughts or gestures of self-harm or suicidality.  It is very important to know that when a person with BPD states they are experiencing thoughts or urges to hurt themselves to take it seriously and not label it as “attention seeking.”

If you or a loved one with BPD experience thoughts of harm, please contact one of these help now resources.

This narrative isn’t exactly true.  A better way to interpret this would be that growing up with parents with poor parenting styles is a risk factor for BPD- not a definite diagnosis.

Why is it important to debunk this myth?  We want to make sure every person with borderline personality disorder is heard.  We want to avoid someone getting overlooked because they had a good childhood with good attachment styles yet displaying other symptoms of BPD that would make them fit the criteria of the diagnosis.

Additionally, having social supports is a valuable part of therapy for personality disorders.  We do not want parents to be overlooked as potential sources of support if they are willing to be helpful parts of the healing process.

MYTH#4: You Can’t Treat the Diagnosis Because it is a Personality Disorder

Some people believe that personality disorders cannot be treated.  However, this myth is far from the truth.

Perhaps this stems from overgeneralizing the fact that current research does not have enough support for medication treatments for personality disorders in general.  However, there are plenty of therapeutic modalities which can be effective in managing and treating borderline personality disorder.

MYTH#5: People with BPD are Manipulative

“Splitting” is a term used to explain when a person with BPD fluctuates between idealization and devaluation, usually of people.  These fluctuations can happen quickly and intensely.  For the person with BPD, it can be difficult to regulate during these fluxes.

Now let’s flip perspectives to the recipient end of these fluctuations between being idealized and devalued.  If someone is shifting quickly between speaking very highly and very poorly of yourself, you may perceive that you are being manipulated.  However, a key thing to note here, is most often the person with BPD is not intentionally trying to their opinion of you to manipulate you so that a certain outcome happens.

Instead, this “splitting” feels very real.  These fluctuations occur not to get something, or for something to happen, but because that is how someone with BPD is perceiving the other person or thing at the time.

The last myth we are going to discuss today is that the misconception that people with BPD cannot have stable lives.  This myth comes in large part from challenges a person with BPD may experience interacting with other.  This can, in turn, affect various areas of life such as relationships and work.

However, just because interpersonal skills can be challenging doesn’t mean it is detrimental.  Through therapy and time, people with BPD can learn the skills to make interactions easier.  This especially becomes more effective when people learn effective emotional regulation skills as well.

Just like how someone with depression may struggle with interactions with others or being motivated to go to work, people with personality disorders will have their challenges in their own ways.  This is perfectly normal.  Through finding good skills, these challenges can improve.

If you or someone you know has borderline personality disorder, know that there are many resources out there to assist.  Here at onlinetherapy . com, we have therapists who specialize in BPD.  For more information please go to Online-therapy.com