Is your Phone Causing Anxiety?

As of 2022, it is a rarity to find anyone without a cell phone. A great majority of people have ditched landlines, transferring themselves to full-time cell phone usage. Nearly five billion people use mobile phones throughout the globe, with three million of those accessing the Internet on a regular basis1. While this change has done wonders for so many reasons, research shows that excessive cell phone usage may have negative impacts on mental health. Additionally, there are physical health problems that have been found to be linked to cell phone use. This is not to say that cell phone usage is all bad, but rather it can lead to harm if it gets out of control.

What does DSM-V say?

The Diagnostic and Statistic Manual of Mental Disorders, 5th Edition (DSM-5), has not yet listed cell phone addiction. However, research has compared cell phone addiction to gambling addiction, which has been listed in the DSM-5. When discussing gambling, four of the eight criteria must be present in order for a diagnosis to be given. In addition, the behavior (gambling, cell phone use, etc.) must be causing significant harm to the individual’s life. It is important to note that these criteria has been changed slightly to be applicable to cell phone use, as opposed to gambling. The eight criteria are:

Researchers at University of Illinois conducted a two-part study with 300 undergraduate students. The first part asked questions primarily in regards to mental health and technology use. The second part of the study went on to ask 72 undergraduate students to spend five minutes detailing a weakness or flaw that makes them uncomfortable in their own skin. Afterwards, the researchers left the room stating they needed to review their answers. During this time one third of the subjects were given access to their cell phones, one third of the subjects were given access to computer games, and the final third were not given access to any technology.

The first part of the study found that those who used descriptions of themselves as having addictive-style behaviors with regards to cell phone or Internet usage, scored significantly higher on scales for depression and anxiety. The second part of the study found that those who were given access to their cell phones were 64% less likely to experience anxiety. Also, 82% of the anxious members from the cell phone group turned their phone on during this time period, while only half of the non-anxious subjects chose to access their phones.

What this tells us, is that there is a correlation between depression, anxiety, and cell phone use. However, it is unclear from this study if the technology has a causal effect on mental health, or if those experiencing mental health symptoms are merely finding an escape from negative symptoms through the use of technology3.

Researchers at the University of Arizona conducted a study involving 346 older adolescents between the ages of 18 and 20, all of whom displayed dependency or addictive tendencies towards their cell phones. The reason the researchers focused on this age group is due to the subjects having grown up with smartphones, as well as being in a transitional stage of life where they are more vulnerable to poor mental health outcomes.

The study found that young people who are dependent on their smartphones appear to have an increased risk of both depression and loneliness. Similarly to the study at University of Illinois, it is unclear if this link is due to those with mental health conditions relying on their smartphones for comfort, or if the technology use is a cause for worsening mental health symptoms. The researchers takeaway from this study, was that dependency on smartphones predicts later depressive symptoms. The belief is that adolescents in particular are too reliable on their device, causing anxious symptoms when unable to access their phones4. 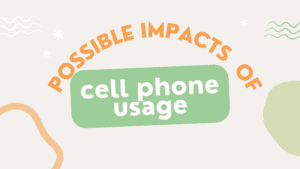 While there is still not definitive evidence to show a causal relationship between cell phone usage and depression, there has been research showing that technology use can negatively impact sleep, resulting in a decline in mental health. The blue light given off by devices can suppress the brain’s access to melatonin, which is a hormone that helps control the natural sleep cycle. The National Sleep Foundation has recommended stopping cell phone, computer, and television usage at least 30 minutes before going to sleep.

Studies have found that college students who are dependent on their cell phones are more likely to experience anxiety during time away from their phone, as well as during leisure time. Individuals often report higher levels of depression and anxiety related to social media usage, due to feeling left out, comparing themselves to others, etc5.

Pain and discomfort can be linked to viewing a digital screen for more than two hours. In addition, individuals report that their eyes begin to burn and/or itch, blurred vision is experienced, eye fatigue is reported, and headaches can be experienced from ‘digital eye strain’.

This is often referred to as ‘text neck’, which refers to the neck pain resulting from looking down at cell phones or tablets for long periods of time.

E coli bacteria, which can cause fever, vomiting, and diarrhea, is found on many phones, as well as 1 in 6 cell phones having trace amounts of fecal matter. Phones have also been found to have MRSA traces, which can cause painful abscesses, as well as life-threatening infections in the bones, joints, surgical wounds, bloodstream, heart valves, and lungs.

Research has shown that texting and driving can be just as dangerous as drinking and driving. While many people believe they are fine to multitask on their phones while driving, this can cause significant impairment and lead to danger to the drivers and those around them.

Preliminary studies have found that cell phone radiation may actually decrease sperm count in men, as well as sperm motility, and viability.

As stated previously, cell phones are not all bad. There are many benefits to having these screens so accessible. It has allowed us to keep in touch with loved ones who are farther away, given parents the ability to be in closer contact with their teens, allowed us to purchase necessary (and unnecessary) items with a few swipes on our devices, and has given us access to information in the palms of our hands. Just as we find with anything in life, it is important to figure out a balance.

Smartphones oftentimes have access to counters, which record your daily phone usage. This can be beneficial in aiming to reduce the amount of time spent on the phone. Starting by looking at how much time you currently spend on the phone, on average, can assist in cutting down on screen time gradually. There are even settings that assist in blocking or limiting the amount of time spent on certain apps.

If you use your cell phone for work, it may be beneficial to set a time to be off of the phone everyday, whether that means placing the phone on do not disturb, leaving the phone at work, or turning it off altogether. This can help with both limiting screen time and preventing burnout. It also can. help to make rules about your phone, such as not looking at it during meal times. This can also be beneficial in regards to enjoying food mindfully. Finally, stopping cell phone use at least 30 minutes before going to sleep can help with limiting screen time, as well as promoting better sleep habits.

With so much negativity in the world, it can make it worse to see negativity all over the Internet. By recognizing the negative triggers on News Sites and Social Media platforms, we can work to avoid coming into regular contact with these sources. If you find that someone you follow on social media is promoting negativity, consider unfollowing them6.

If you are dealing with anxiety related to technology, our therapists through Online-Therapy.com provide Cognitive Behavioral Therapy (CBT) and can assist in overcoming symptoms of concern.

Our platform offers a complete online therapy toolbox which includes time with a personal therapist who can support you throughout your journey. If this is something you have interest in, we would love to hear from you.

When you are ready, head over to www.online-therapy.com, we are looking forward to helping you!

Physician One Urgent Care. The Link Between Cell Phone Use, Anxiety, & Depression. (https://physicianoneurgentcare.com/blog/the-link-between-cell-phone-use-anxiety-depression/). Accessed on 05/31/22.

The University of Arizona. Which Comes First: Smartphone Dependency or Depression? (https://news.arizona.edu/story/which-comes-first-smartphone-dependency-or-depression). Accessed on 05/31/22.