What are Cognitive Distortions & How to Combat Them

What are Cognitive Distortions?

Cognitive Distortions, sometimes referred to as Thought Traps, are defined as ‘faulty or inaccurate thinking, perception or belief.’ Cognitive distortions are typically negative, not positive. Oftentimes, these thoughts pop up and disappear just as quickly. However, sometimes these thought traps become a pattern that ends up interfering with day-to-day life and relationships. This chronic thinking can lead to anxiety, depression, and substance abuse1. 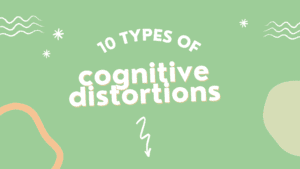 Catastrophic thinking involves expecting the worst possible outcome. For example, if your spouse typically gets home around 5 pm and at 5:10 they still are not home, you may assume that they were in a terrible car accident. This can lead to or be worsened by depression or anxiety2.

While Catastrophic Thinking involves exaggerating the likelihood, importance, or meaning of an idea, Minimizing means downplaying an idea. An example could be an individual who gets a promotion at work but states it happened because they did not have anyone better to give the promotion to3.

Discounting the positive involves not giving credit to positive things that happen. For instance, if you get feedback from your boss on a project and it involves a lot of positive feedback but has one or two suggestions of things to change, you only focus on the negatives. You do not acknowledge the positive points and even may make excuses as to why the positive points are not applicable4.

Individuals who use this distortion rely heavily on their ‘gut’ instinct, rather than evidence. This can lead to irrational decision making. Those with eating disorders often display this thought trap. Example: If I do not purge after eating then I will gain a bunch of weight5.

Labels are given to yourself or others, which focus on one past event or behavior. This can damage self-esteem, as well as views of other people. For example, you try to learn an instrument and do poorly, so you decide you are a terrible musician and will never get better6.

Positives are often discounted, yet negatives are fixated on. Day-to-day life seems to have a negative lens and leads to increased feelings of hopelessness and helplessness. This can oftentimes coincide with suicidal ideations and depression. Individuals experiencing this may isolate themselves from others. Example: your friend states that they miss you and want to spend time with you. You ask them to go to dinner tomorrow but they say they are busy and ask for a rain-check. Instead of recognizing they miss you and want to schedule something else, you focus on their lack of ability to make these plans happen7.

There are two subcategories that fit into this cognitive distortion: mind-reading and fortune-telling. With jumping to conclusions, your decisions are based upon what you believe someone else is thinking, rather than allowing them to share their thoughts8.

This thought trap is a subcategory of Jumping to Conclusions, which involves filling in gaps of knowledge by making assumptions regarding other’s thoughts. This may mean anticipating reactions or believing you know what someone is thinking or feeling. For example, you are walking into a classroom late and assume everyone is judging you, thinking you are a slacker for being late9.

This is another subcategory of Jumping to Conclusions, which involves insisting you can predict the future, regardless of what actions are taken. For instance, one may assume that due to their chronic pain, they will never be happy and never feel relief, regardless of if they put work into feeling better or not10.

Individuals who exhibit this distortion apply their personal lexperience from one situation to the next. Example: you were cheated on by your partner who you were dating long-distance, so now you assume every long-distance relationship is doomed to end similarly11.

With this distortion, one will find themselves blaming things outside of their control on themselves. This involves the belief that everything someone says or does is a reaction to you specifically, which can lead to feelings of exclusion. This can also lead to comparing oneself to others. An example is not being invited to a get-together and believing you were not invited so they could talk badly about you12

There are a variety of ways to challenge these thought traps. While everyone may have different methods to combat these thoughts, a favorite method is keeping an Automatic Thought Record.

Identify the Thought & Type of Distortion

The first step is to identify which distortions you’re defaulting to, so you can effectively combat the specific thought trap. For instance, imagine that you receive advice regarding your spouse and having a conversation with the loved one. In this case, you say you do not want to confront this person, as you know what they will say. After thinking about it you realize you are Mind Reading, as you are determining what the person will say, rather than trying to have a productive conversation.

Once you have identified which Cognitive Distortion you are displaying, look at what ‘proof’ you are telling yourself to back up this narrative. Taking the example of Mind Reading from above, you may consider what evidence you are using, such as the way they have reacted previously to similar situations. The evidence could also involve ideas of the person being stubborn or unwilling to change.

Next, think about what evidence there is to disprove the distorted thought. Take the Mind Reading example and consider what disproof there is. The disproof might be that in previous conversations the other person was open to what you were saying. Maybe in the past when you introduced topics in a certain way, it went over easier. The idea overall is to challenge the unproductive thought.

Lastly, think about if someone else were in this situation. For instance, consider the situation above. Think how you would feel if someone in your life was assuming what you would say or do in any given situation. This is something to think about, so as to recognize if you are placing unrealistic expectations on others or on yourself13.

If you are dealing with Cognitive Distortions, our therapists through Online-Therapy.com provide Cognitive Behavioral Therapy (CBT) and can assist in overcoming symptoms of concern.

Our platform offers a complete online therapy toolbox which includes time with a personal therapist who can support you throughout your journey. If this is something you have interest in, we would love to hear from you.

When you are ready, head over to www.online-therapy.com, we are looking forward to helping you!